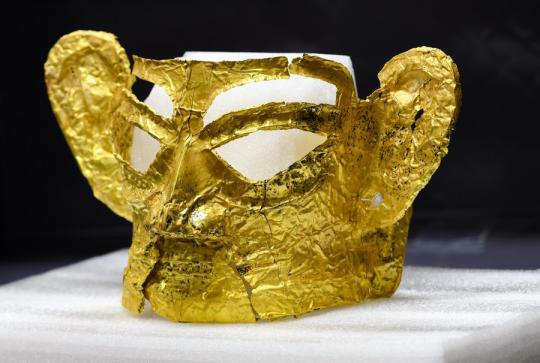 Photo taken on Sept 2, 2021 shows a golden mask discovered at the No 3 sacrificial pit of the Sanxingdui Ruins site in Southwest China's Sichuan province. (Photo/Xinhua)

Another gold mask discovered at the Sanxingdui Ruins site in Guanghan, Sichuan province, is the biggest of its kind unearthed at the site so far and further illustrates the custom of the ancient Shu people to use gold items, experts said.

The mask, which is relatively intact, is 37.2 centimeters wide, 16.5 cm high and weighs about 100 grams. It was discovered at the No 3 pit, the Sichuan Provincial Cultural Relics and Archeology Research Institute said on Thursday. Earlier this year, a likewise eye-catching gold mask was found at the No 5 pit.

The institute announced the discovery of 1,771 cultural relics from the No 3 and No 4 pits, of which 557 are relatively intact and the rest are fragments. Among the items, the gold mask is a highlight.

Gold items were found at the Sanxingdui Ruins site as early as 1986, including gold foil pieces that show how the precious metal was used by the ancient Shu people. Shu was an ancient state in what is now Sichuan.

Xu Feihong, a Shanghai University lecturer who is in charge of the excavation of the No 3 pit, told chinanews.com that the gold mask was found in June. After restoration, it turned out to be the biggest complete golden mask found at the site, with fine texture and quality.

Relatively intact relics from the pits include 314 bronze objects and 147 elephant tusks.

Most popular in 24h

LINE
Media partners: | Xinhua | CGTN | China Daily
Back to top About Us | Jobs | Contact Us | Privacy Policy
Copyright ©1999-2021 Chinanews.com. All rights reserved.
Reproduction in whole or in part without permission is prohibited.