No one enjoyed a bigger birthday party than Xiao Qi Ji did in Washington on Saturday.

While the COVID-19 pandemic has made gatherings almost impossible, the giant panda cub drew hundreds of visitors to the National Zoo to celebrate his first birthday.

Xiao Qi Ji, or "Little Miracle", first savored a specially made fruitsicle cake prepared for his mother, Mei Xiang, early in the morning at their outdoor habitat. The frozen cake was decorated with sweet potato, apple, carrot, pear, sugar cane, banana and bamboo.

The cub apparently enjoyed the treat. Near the end of the first course of his breakfast, he lay on his back and held the heart-shaped top of the cake with his little paws, licking and sucking the frozen diluted apple juice.

After about 45 minutes, the pair walked over to Xiao Qi Ji's cake－a bigger one. It was adorned with a giant, red number 1 on top. The cub's father, Tian Tian, was in the neighboring habitat.

Visitors enjoyed watching the mother and son tucking into the treats, with many streaming the scene live on social media accounts, and the zoo screened the show for the public through its Giant Panda Cam.

"You came into the world last year during the pandemic. At such a difficult time, your arrival and every bit of your growth have given us joy and hope. For us, you are a miracle, and that's why you are called Xiao Qi Ji," Qin said.

"You have truly added a splash of color to the exchanges between Chinese and American people," the envoy added. 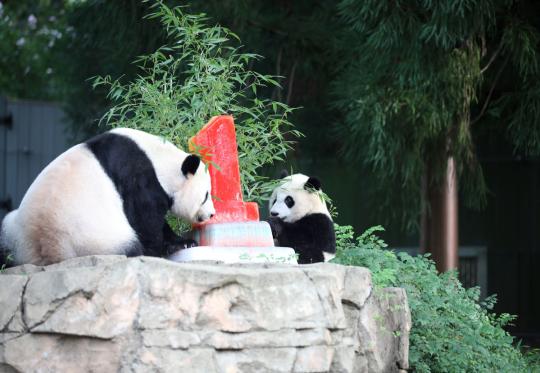 Brandie Smith, acting director of the Smithsonian's National Zoo and Conservation Biology Institute, said the panda cub is more like his mother than Bei Bei, a cub that was born and lived at the zoo previously.

"He's a lot more cautious, he's a lot more thoughtful. And it's been so great to see him develop and his personality come out," said Smith, who has worked at the zoo for 13 years, starting as curator of giant pandas.

Since the beginning of the pandemic, the zoo staff members have been working safely, wearing masks and keeping a distance from one another.

"One of the great things of working with pandas is a chance to work with our colleagues in China, and with a pandemic, we haven't been able to visit them in person," Smith told China Daily.

Instead, the zoo and Chinese colleagues had email exchanges and video calls. "The information goes back and forth, but it will be nice when we can finally see our friends again in person," she said.

Under a new agreement that the zoo signed with China, Mei Xiang and Tian Tian, the giant panda couple, will stay at the zoo along with their son for another three years, after an earlier deal inked in 2015 expired last December, according to the zoo.

"We signed a contract last year, and it kept pandas here. It keeps pandas here through 2023, and then we'll start talking. Actually, we just began our meetings to talk about the next steps when this contract ends," Smith said.

As a public health precaution due to COVID-19, the zoo had been temporarily closed since March last year, but it reopened in late April this year when infection cases dwindled in Washington, DC.

Effective July 30, all visitors age 2 and older are required to wear a mask in all indoor spaces at the zoo, regardless of their vaccination status.

Bryan Amaral, senior curator of animal care science at the zoo, said that the pandas will not have noticed much difference during the pandemic other than people wearing masks.

"We've been really successful as far as how we've adapted to the pandemic; nothing's really affected us, which is the great news," he said.

Most popular in 24h

LINE
Media partners: | Xinhua | CGTN | China Daily
Back to top About Us | Jobs | Contact Us | Privacy Policy
Copyright ©1999-2021 Chinanews.com. All rights reserved.
Reproduction in whole or in part without permission is prohibited.